In her second suspect appearence, she wears a yellow access badge.

In her third appearence, now 34-years-old, she wears a standard hospital gown with diamond pattern.

Pain in the Vein

Azraah was interrogated when team found her Conspiracy Theories book with ''Benjamin Brinks Edition'' written on it in the park.She said that she believes that Benjamin is an alien and she wanted everyone to know it.

Azraah was interrogated again after made a book about Angie Peters Conspiracy Theories.She thinks that Angie is behind all video game madness and that she should be arrested.

She was found innocent after team arrested Mike Clover for a crime.

Azraah found herself in trouble after team found out her new book about Teresa Technology.She said that she thinks Teresa was behind video game madness and she said sorry to Angie Peters because of incident she made in last investigation.

Azraah was interrogated again after team found her cellphone in Victim's bag.She said that Teresa stole her phone because Azraah secretly took some private photos of Teresa for new book.Teresa got mad and she never returned her phone.

After investigation team arrested her for a crime.Azraah denied involvement,but she later confirmed that she strangulated Teresa and that she was hacking games.Azraah said that all of VRClub's games were useless and stupid.She thought that they need something that will make them popular in wrong way,so she hacked into them and made disturbing effect causing people to go crazy.She never wanted to stop because she found it extremly fun when people were losing their minds and when they were killing each other.In courtroom,Azraah started laughing maniacally and she said that she had a lot of fun while doing this,but Teresa found out it was her,so she had to kill her.Then she tried to attack player but Juniper hit her with frying pan.Azraah was nearly insane and then she pulled out gun and took Judge and pointed gun at her head and ran away.In Additional Investigation,team found her hiding near docks and they saved Judge.In court room,Judge sentenced her to life in Asylum accompained by a psychiatrist. 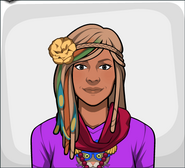 Azraah, as she appeared in Pain in the Vein (Case #10 of Laroy Bay). 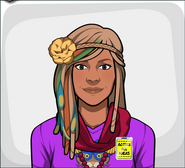 Azraah, as she appeared in Deathcon (Case #12 of Laroy Bay). 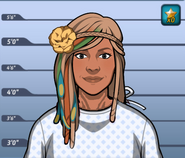 Azraah, as she appeared in Stir Crazy (Case #39 of Venusville).
Add a photo to this gallery
Retrieved from "https://criminal-case-official-fanfiction.fandom.com/wiki/Azraah_West?oldid=204617"
Community content is available under CC-BY-SA unless otherwise noted.