Austin was a 28-year-old Private investigator with short brown hair and yellow eyes, as well blue skin. He is seen wearing a plain shirt underneath his crocodile jacket. Additionally, he has a bowtie, a scar and a shield brooch who is actually a secret camera.

In his suspect appearance, he is seen with a crystal necklace and it's discovered that he eats spicy food and knows knots.

In his second suspect appearance he is seen wearing an earring and it's discovered that he plays poker, eats hot dogs and uses talcum powder.

In his third suspect appearance his brooch is abandoned and his hair is partly dyed in dark blue and it's discovered that Austin watches Transmutators 9, uses insect repellent and listen to Listen to the Thunder. 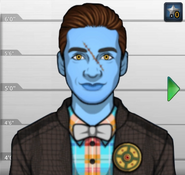 Austin, as he appeared in Cardiac Arrest, Killing Two Birds with One Stone and Lights, Camera and Blood. 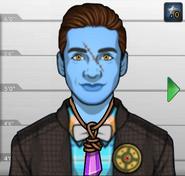 Austin, as he appeared in A Cold Death. 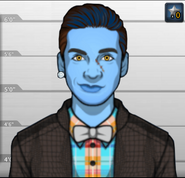 Austin, as he appeared in Death Hot as Fire, Kiev In Fire and Living Your Dream. 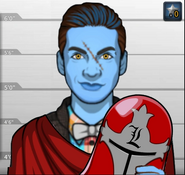 Austin, as he appeared in Countdown to Disaster. 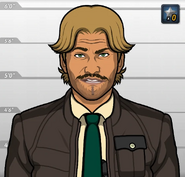 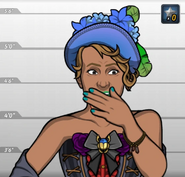 Cathy LaVey, Austin's sister-in-law
Add a photo to this gallery
Retrieved from "https://criminal-case-official-fanfiction.fandom.com/wiki/Austin_LaVey?oldid=196239"
Community content is available under CC-BY-SA unless otherwise noted.