Events of Explore the World

Send Shivers Down My Spine

Death in the Fast Lane

The King Has Fallen

Evil Under the Sun

Fall at the Last Hurdle

Aurora's killer would turn out to be her Zodiac ally and Leo, Amir Haddid.

When confronted in the holding cell, Amir sighed and told them there was no use in hiding it, admitting that he did kill Aurora despite their friendship. Amir started to tell the pair what happened and told them to imagine the scene. The Zodiac were discussing the final stage of Project Enigma at the rendezvous point when Aurora started to disagree with the rest of them, her allegiance to the Zodiac wavering. Aurora then confessed that her loyalty to them had been shaken and that she'd seen the truth, that the Zodiac's work was barbaric and would only create a darker world. Aurora and Aida clashed for a while, with Aida demanding that Aurora think of the children, prompting Aurora to snap back that she was and she couldn't stand back and be quiet any longer. Knowing that Aurora would only disturb the plan, Aida signalled to Amir reluctantly, prompting Amir to pick up the ice block to continue the Zodiac's plans. After Aurora's final cry for Spencer, Amir brought the ice block crashing down, her life extinguished. After Amir pleaded to his son to release him with Imran refusing, the GPA handed Amir over to the authorities for trial. 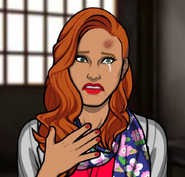 Aurora, being exposed as Gemini. 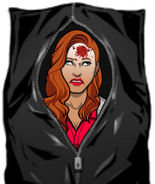 Aurora's body.
Add a photo to this gallery
Retrieved from "https://criminal-case-official-fanfiction.fandom.com/wiki/Aurora_Garcia?oldid=228896"
Community content is available under CC-BY-SA unless otherwise noted.