Ashley Diaz was a suspect in the murder investigation of Jennifer Carter. in The Grim’s Butcher (Grimsdale edition) (Case #7 of Grimsdale), Gail Vangsness in Have Fun Til’ It Ends (Case #53 of Grimsdale) and her boyfriend, Julian Edward Ramis in Never Knew... (Case #57 of Grimsdale). She also made minor appearances in A Head Loss (Case #4 of Grimsdale), and Life is Short (Case #9 of Grimsdale).

Ashley made a minor appearance, back when she was a boy called Asher, where Diego introduced her as his half-brother (now half-sister).

Ashley became a suspect in this acse, appearing as Asher, since she the player and Diego saw her in the junk-yard. When informed of Jennifer’s death, she cried.

She was later interrogated again, after Diego and the player saw the victim’s message to her, telling her to man up. This is where she revealed her gender identity, saying she doesn’t want to be Asher anymore, and that she wants to be a woman, she then ran off.

After Jennifer’s killer was arrested, Diego and the player went to search for her, where she was found in Victoria’s house, and Diego gave her a hug, and scolded her for running away, and told her he doesn’t care whatever gender she wants to be. After she was shown to her “best-friend”, Raphael, Raphael mocked her, and left, ending their friendship.This led to Ashley breaking down in tears, and running away.

After the team arrested Raphael for using a toy to fool 15 woman into sleeping with him. Ashley came to the station, to discuss it, showing that she is glad he got what he deserved.

While Diego and Hamilton were recapping the case, Ashley came up to them to tell them she wants to speak to them. After Diego finished scolding her for her presence in the nightclub, Ashley told the duo that she saw the victim entering the security room, before going wild, implying that the killer drugged her there.

Ashley was spoken to again after her nail polish was found on the a piece of fabric from the victim’s clothes. Ashley revealed that at the party, her boyfriend held her hands as some sort of affection, where the victim came up to him and attacked him, for touching Ashley “without her permission”, and when she started hitting Ashley’s boyfriend, Ashley decided to intervene, where she fought Gail and ripped a piece from her dress.

After the killer was arrested, Ashley and Julian came to Diego and Hamilton, asking for Hamilton’s help. Hamilton went to speak to Ashley to see what she and Julian want from him. Ashley explained that she and her boyfriend, Julian, have developed a remix for a song, which they were hoping Kalua would use at the party, but unfortunately, Julian ended up losing it. Hamilton and Ashley then searched the dance floor where they found a broken disk. Ashley panicked, but lucky for her, Hamilton fixed the disk and then gave it to Rozetta, who recovered the data inside it. The two then went to Kalua and gave her the disk, where she agreed to use it at the party.

After finding her choker at the infirmary, Mia and Yoyo decided to speak to Ashley, who got excited when seeing Mia, but bummed when she heard that Diego wasn’t with her. Ashley was then told of her boyfriend’s death, where she surprisingly took it well, claiming there’s plenty of fish in the sea.

Mia, Bruno and Yoyo decided to go to Hamilton’s office to inform him of the progress they made on the case, where they caught him struggling with Ashley.The trio calmed down Ashley and spoke to her to see what’s the issue where they learned from her that Hamilton had a one night stand with Julian, before she kicked Hamilton in the crotch and stormed out the office. 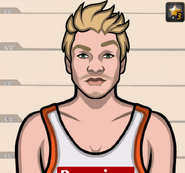 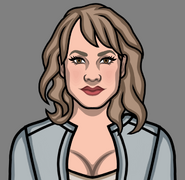 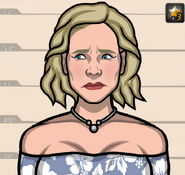 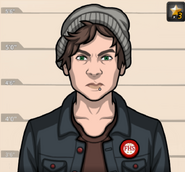