Arif Hassan is a main character of Season 3 of Criminal Case where he serves as a Tech Expert of Fario Police Department.

In Season 1 he was a suspect in the murder investigation of RoboDef CEO Carl Rose in Two Robots And a Human (Case #12 of Fario). He also helped the Fario PD with analysis due to their tech experts injury in Under The Drone (Case #14 of Fario). Then he appeared as a suspect again in Hazardous Sacrifice (Case #16 of Fario), Legends of The Forest (Case #33 of Fario) and The Saddest of All Ends (Case #52 of Fario).

Two Robots And a Human

Arif was called by Chief Bennet to show the player and Angela the district Digital Utopia. When they were seeing out different parts of the district, they found the dead body of RoboDef CEO Carl Rose. Arif recognised the victim immediately and was added as a suspect. When asked about the victim, arif said that nobody gave him any job because he was an ex cop and everyone took it negetively, but Carl was different as he gave Arif a job and he became a succesful tech expert later on because of him.

Arif was interrogated again after the team found a message in victim's mobile that he is not intrested in the victims job. After being asked about it, Arif said Carl was offering him his old job again after he left his job to be a tech expert. He offered him the job to put viruses into the source codes of the robots, but Arif rejected it saying robots are his friends here.

Arif was interrogated for the third time after the team found his trophy at the murder scene. Arif said that he won this trophy when he was Carl's employee and Carl thought his achievements belonged to the company so he stole the trophy.

Later, Arif was found innocent when the team found Sonny Z495C for the murder.

After finding Peter Dubov's phone in the crime scene, the team needed someone to analyse it due to lack of technical support. So they came to Arif with Peters phone to handle the analysis, which Arif agreed to do so. After analysis, Arif was able to tell the team that the killer has hacking skills.

Arif handles analysis whenever there is a lack of technical support in Fario PD. He handles the analysis associated with technology. 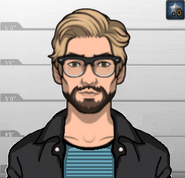 Arif, as he appeared in Season 1
Add a photo to this gallery
Retrieved from "https://criminal-case-official-fanfiction.fandom.com/wiki/Arif_Hassan_(DD)?oldid=165436"
Community content is available under CC-BY-SA unless otherwise noted.