Anthony Blackpaw (also known as Demos; 1998-2019) appearing as a recurring character in Criminal Case Venusville, was a suspect in the murder investigations of three people before killing sociologist Dawn Bennett in Arms of Lucius (Case #18 of Venusville). After getting granted immunity for a crime, he appeared as a suspect in the murder investigation of secret agent Anya Ivanova in Avenue of Escape (Case #29 of Venusville) before killing escaped killer Kemal Kumar in Brink of Disaster (Case #30 of Venusville). He also made three quasi-suspect appearences before getting murdered in Of Evil Portent (Case #57 of Venusville).

Anthony was a 21-year-old zookeeper and leader of Order of Specters. He had short brown hair under a light brown cowboy hat with a dark brown band on it. He also had brown eyes and wears a camo-patterned shirt under a black unbuttoned "overcoat". It is known that he took sleeping pills, readed The Jungle Book, had spended time with Alaskan malamutes and that he used to own a husky which has been killed by Astro Hawtee with his car.

In his second appearance, it is learned that he was an amateur pilot, ate pumpkin soup and had an Irish Wolfhound.

In his third appearance, it is known that he visited the Public Aquarium and used mouthwash.

From his fourth appearance, he was wearing a green neckerchief with a grey wolf pattern and has frostbites. It was known that he readed Cloud Mall, went to GrimCom and ate poutine.

In his fifth appearance, his frostbites have healed and he ditched the neckerchief. It is learned that he knew explosives.

In his sixth suspect appearance, he had a rash on his neck. It is known that he was a climber, used Morse and taook anti-radiations pills.

In his second quasi-suspect appearance, he wore orange prison jumpsuit with a white shirt under it.

Anthony was interrogated after the team found a poster of him and multiples animals on the crime scene. When asked about the victim, store clerk Astro Hawtee, he told them that he had meant him but never really gotten into a conversation with him or anywhere else. When ask if he had seen anything suspicious, the zookeeper told them that nothing really stood up to the word suspicious as any day at the zoo can be fantastic or turn out wrong.

He was questioned again when the player and Bruno discovered that Astro had hit his husky with a car, killing the animal. Anthony told them that Hawtee never had given him an apology for it, going as far as to accuse Blackpaw of animal abuse for having let his Alaskan malamute and husky to play outside. Astro came to the zoo and ripped into Anthony, telling him that peoples like him shouldn't be working in a zoo if they can't take care of animals, angering him. When asked if he would go as far as to murder someone, he told them that he rather die by the hands of a wild wolf than to perish in prison for killing a no-brain man.

Although angry at the victim, Anthony Blackpaw was found innocent when the duo arrested zoo visitor Mike Carter for the murder.

Anthony came in the station to inform the team about Lucius saying that he overheard peoples talking about it at the zoo and how it's a creature created by Order of Specters. Then, he told them that he heard one of them say that they had to on a ski jumping competition, making the team go there to find clues about those mysterious peoples.

Anthony came back into suspicions when his hat was found at the Station Parking Lot. When asked what he was doing and why it was dirty, Anthony explained that he had an accident and felt into mud, causing his hat to get dirty while he was going back to his house. He explained that, in the hurry of getting cleaned, he had forgotten his hat there. When asked about the victim, escaped killer Kemal Kumar, Anthony explained that he never met the guy and might have seen him near a restaurant or something. Unable to help the team, he wished them good luck.

The zookeeper was questioned again when the team discovered that Anthony worked at Kemal's restauramt in the past. Anthony admitted that he knew the victim but he had such a bad memory of him that he rather wished he never worked in that damned place. When asked what he meant, he explained that the victim wasn't the best person to work with or for as he had a big temper when he wanted. When asked if he had killed him, Anthony explained that he would rather climb Mount Everest than murder someone after what happened to Dawn.

To the team's horror, Anthony was revealed to be the killer. Denying it at first, crying that he wouldn't hurt a soul, he quickly dropped the act when Amber told him the evidences. After congratulating them for not falling to his innocent act this time, he admitted to being Demos and the murderer. He explained that he couldn't let some random-ass idiot know his true identity. When asked about the Morognium, the zookeeper giggled and told them Stella had already taken it to freeze the damn city back to ice age! When asked about her identity, he explained the team already had met her and that Rozetta was just a pawn to make them believes he was an innocent man. Judge Grayson, horrified by how cruel Blackpaw actually was, sentenced him to life in prison under maximum security for the murders of Kemal and Dawn, the illegal cloning experiments as well as providing multiple fake leads to the police (including Lucius and Yellow Raincoat Killer). 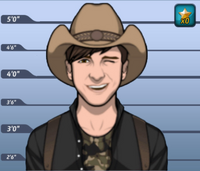 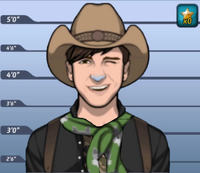 Anthony, as he appeared in Arms of Lucius (Case #18 of Venusville) 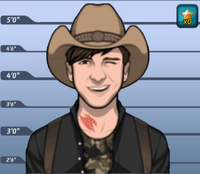 Anthony, as he appeared in Brink of Disaster (Case #30 of Venusville) 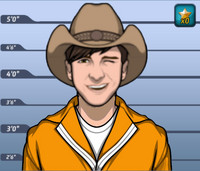 Anthony, as he appeared in The Bird Box (Case #36 of Venusville)
Add a photo to this gallery
Retrieved from "https://criminal-case-official-fanfiction.fandom.com/wiki/Anthony_Blackpaw?oldid=219096"
Community content is available under CC-BY-SA unless otherwise noted.