Annabeth Quinn appeared as a quasi-suspect in Destructive Experiments (Case #14 of Alpha Bay), Old is Gold (Case #15 of Alpha Bay) and A Shroud Made of Needles (Case #17 of Alpha Bay) before killing zookeeper Peter Bradley in Striking From the Shadows (Case #20 of Alpha Bay). Later, he was freed by Cascade in The Crimes of Cascade (Case #46 of Alpha Bay).

Annabeth is a 34-year-old forest ranger. She has curly black hair and blue eyes. She is seen wearing a camouflage jacket with side zips over a white t-shirt and sporting red lipstick.

In her suspect appearance, she sports a golden brooch on the left side of her jacket. It is known that Annabeth eats poutine, reads Jack London and smells of blackberries.

A Shroud Made of Needles

Striking From the Shadows 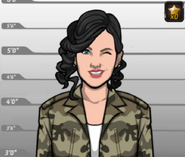 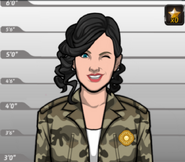 Annabeth, as she appeared in Striking From the Shadows (Case #20 of Alpha Bay).
Add a photo to this gallery
Retrieved from "https://criminal-case-official-fanfiction.fandom.com/wiki/Annabeth_Quinn?oldid=236291"
Community content is available under CC-BY-SA unless otherwise noted.