Initially appearing as the Chief of Police for the Starlight Shores Police Department, Andrew wore a pinstripe blazer over a light blue buttoned shirt, along with a black armband containing the letters "FBI" in large white writing. He also had black hair in a quiff. In Crimes of Liberty, Andrew is now 33 and serves as the homicide detective for the New York Police Department. He has blue eyes and short black hair, along with a blue shirt below a bullet proof jacket, containing the letters "FBI" in white.

Hooked on a Feeling 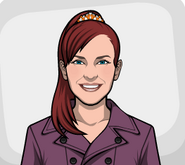 Dana Ramone, Andrew's late wife.
Add a photo to this gallery
Retrieved from "https://criminal-case-official-fanfiction.fandom.com/wiki/Andrew_Ramone?oldid=184060"
Community content is available under CC-BY-SA unless otherwise noted.