Ana Conte was the victim in Payday (Case #9 of Pheadmouth).

Ana was a food critic with blue eyes and long brown hair and a plaid cap. At the time of her death, she was seen wearing a black shirt underneath her green coat and pearl necklace.

The killer turned out to be pizza restaurant "Pizzadise"'s head chef Sara Mancini.

Admitting to the murder, Sara told the team that Ana had ruined her parents life. Twenty years ago, Sara's parents were the owners of Pizzadise, which was very popular at that time, while Ana was also a restaurant owner, which was not really popular. Jealous of Pizzadise, Ana started to badmouth other customers that Pizzadise was a secret prostitution area. Being exhausted by Ana's rumours, Sara's parents had to close Pizzadise and committed suicide, leaving Sara alone, who had to work to be a pizza chef so that she could reopen Pizzadise again. Eighteen years later, by Sara's hard work, she finally reopened Pizzadise and became the owner. However, Ana still came and badmouthed the restaurant. Being too angry, Sara decided to kill Ana by cutting her in half by a chainsaw. Judge Park sentenced her to 15 years in prison. 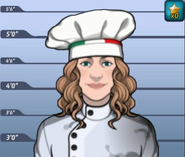 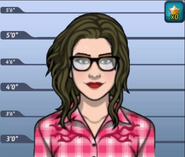 Maria Conte, Ana's daughter.
Add a photo to this gallery
Retrieved from "https://criminal-case-official-fanfiction.fandom.com/wiki/Ana_Conte?oldid=123976"
Community content is available under CC-BY-SA unless otherwise noted.