Case #6 Slow and Painful
Amy Davis, appearing as a recurring character in Criminal Case Venusville, was a suspect in the murder investigation of prisoner Josip Filipovich in The Bird Box (Case #36 of Venusville) and a quasi suspect in Out of Court (Case #50 of Venusville) and Breathing Space (Case #55 of Venusville). She also made minor appearences in multiple cases during the season.

Amy called Venusville Justice Fighters to inform them about finding Brooke Long chained up next to a dismembered body of iPear CEO Eoin Cafferey.

She made one more appearence after she spotted Jason Stone near the crime scene.

After team arrested Daisy Blim for a murder and found Mitchell's notes about the organization, Amy informed the team about teenagers having a crazy party at the museum

After team finished their investigation, Amy informed them that she found a body at the mine.

Amy called the player on the phone to help her after she fell in a giant trap near the cave.

Amy was found lying down in a big hole next to Dawn Bennett's corpse. Team took Amy to the hospital.

Amy informed the team that she found Ryan Valentine's corpse in the sewers.

A Ball of Fire

The End is Near 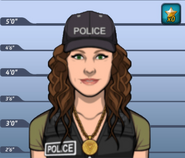 Amy, as she appeared in The Bird Box (Case #36 of Venusville), Out of Court (Case #50 of Venusville) and Breathing Space (Case #55 of Venusville).
Add a photo to this gallery
Retrieved from "https://criminal-case-official-fanfiction.fandom.com/wiki/Amy_Davis?oldid=205968"
Community content is available under CC-BY-SA unless otherwise noted.