Amir Agarwal is a main character in the series of Gottingham and Parinaita, however it is confirmed that he comes from the Gottingham police force, He came and joined the team after the events of In the Inky Dark Night (Case #30 of Parinaita) 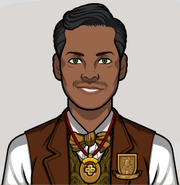 Amir Agarwal, The profiler/helper of the reborn Parinaita police force
Add a photo to this gallery

Retrieved from "https://criminal-case-official-fanfiction.fandom.com/wiki/Amir_Agarwal?oldid=86858"
Community content is available under CC-BY-SA unless otherwise noted.