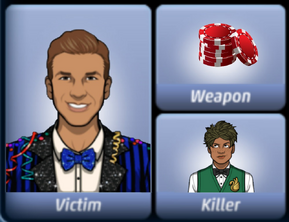 Amber Herrera: Mr Soders, game is over, we know it was you who killed Faris.

Ethan Soders: Are you crazy ? I would never harm my highschool friend.

Amber: Says the guy who stuffed poker chips down his throat. We found your sweat on them.

Ethan: I do sweat a lot, like every human being. Now please go away, I have work to do.

Amber: And what about gimlet ? You left traces of it on his card deck.

Ethan: Oh come on, gimlet is something everyone here drinks. You should try it too.

Amber: But does everyone have freckles like you ? You left traces of your freckle cream on Faris's wallet.

Ethan: I guess I don't have to lie anymore <Rank> <Name>. I killed Faris Cooper.

Amber: Why ? Because he stole your girlfriend in high school ? You know that was long time ago ?

Ethan: No, I killed him to protect myself !

Amber: But why ? Faris was trying to harm you ?

Ethan (facepalms): I guess I should come clean...

Ethan: Me and Faris...were both in Order of Specters.

Amber (shocked): You two were members ?

Amber : I bet you killed him because he tried to reveal your sick plans didn't you ?

Ethan: Let me start from beggining.

Ethan: We...we joined back in high school. We were just stupid teens back then, I didn't thought that it's that serious.

Ethan (panicking) : But believe me, it was. I don't want to be a part of something dangerous like that.

Amber: So you know their plan ? Tell us Ethan. Tell us. You can save lives of many peop-

Ethan: And to risk myself getting killed ? NO.

Ethan: Unfortunately...when we left, Faris started to blackmail them for money, threatening to reveal their plans.

Ethan: Even worse, he told them that both of us were planning to reveal them.

Ethan (panicking) : I couldn't let him put my life in danger for something I didn't do.

Amber: And you killed him ?

Ethan (sad) : I knew that it wasn't the best decision, but I had to no choice. I sent them a message that their secrets are safe with me.

Amber: The killer always has a choice Mr Soders. You are under arrest.

Judge Pierre: Ethan Soders, you are here today because you murdered your friend Faris Cooper, how do you plead ?

Ethan: Guilty your honor, I knew that it's not the best decision, but both of us would get killed eventually.

Judge: One thing still remains unclear. Out of all ways to kill him, you decided to choke him with poker chips...just why ?

Ethan (panicking): I had to sent a message to Demos and Stella, they needed to know that I don't have anything to do with the blackmailing.

Judge: Do you know their identities by any chance ?

Ethan: I would tell you everything if I knew, but even if I do know, they would sent someone to kill me.

Judge: Well Mr Soders, for the murder of Faris Cooper, I hereby sentence you to 18 years in prison. Court dismissed.

Ethan: At least I will be safe in prison...At least I hope so.

Retrieved from "https://criminal-case-official-fanfiction.fandom.com/wiki/All_Bets_are_Off/Transcript?oldid=143927"
Community content is available under CC-BY-SA unless otherwise noted.