Alicia Hussey was the victim in Down with the Queen (Case #42 of Grimsdale).

Alicia was a 19 year old girl who had blonde hair and blue eyes. At the time of her death she wore nude-pink dress and a gold necklace and had her hair in pigtails.

After Donna Walker announced her and Ernst as Prom King and Queen, an anvil fell over them injuring Ernst and killing Alicia instantly.

The killer was Cindy McMinn. Cindy knew that Mia and Hamilton will discover that she is the murderer and so she didn’t deny it. She then explained to the duo she had no idea what was happening and that she was smoking cigarettes which she left on the table and suddenly she saw herself at the hidden area which she lead the duo to and when she got out of it, she was surprised by seeing anvil have fell on Alicia and Ernst. Mia was confused, she wanted to believe her best-friend, but she remembered that Nadine have said that they were already done with the protozone, yet the effects that Cindy claimed that happened to her were the same one that Samantha suffered by. This is when Rozetta came out, and told Mia and Hamilton that Cindy was lying. She then told them that she realized something similar between Nadine and the people whom the protozone developer ordered their test subject to kill. She then told the duo that at the day the protozone was stolen from the dome Nadine, Adolfo, Phoebe, Alicia and Cindy were working as actor for her Murder Mysteries live-action game and seeing that Cindy is the only one other than Nadine, who isn’t dead, this implies that she is the one who stole the protozone. Mia looked at Cindy and asked her if this was true, where Cindy showed her true colors and confirmed that Rozetta’s theory was true. Tearful, Mia was about to put handcuffs on Cindy’s rests, but was interrupted by seeing the whole team, except David and Randall pointing their guns at her, Rozetta and Hamilton. Realizing their odd behavior, Mia asked Cindy what she did to them, where Cindy smiles and revealed she dozed them with protozone and now they can do nothing but obey her orders for the rest of their lives. She then gave Mia, Hamilton and Rozetta an ultimatum: Either they let her go and survive or they try to arrest her and end up being shot down as a result. Mia didn’t want Cindy to get away for her betrayal, but she knew if they died, the team may stay like this for eternity, so she let Cindy escape from them. 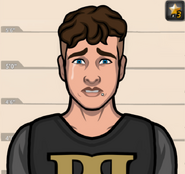 Nasim Mukhailif, Alicia’s boyfriend
Add a photo to this gallery
Retrieved from "https://criminal-case-official-fanfiction.fandom.com/wiki/Alicia_Hussey?oldid=201426"
Community content is available under CC-BY-SA unless otherwise noted.