Start a Wiki
Alex Holiday was a main character in the series of Parinaita. He is the city Judge who believes in Justice and the right of the people. He was a suspect in the murder of Duncan Newton and Charlie Queens in The Cost of War (Case #6 of Parinaita) and then he helped the player in Kill Switch. He was then later killed and murdered in A Light Lunch of Guts.

She murdered Alex because he was planning to ban her from the country for spending fake rumors, of course these rumors won't fake as The Child of Time was under her protection, but Alex wouldn't believe it as he thought it was a legend. She managed to get The Child of Time to go to Rose Hill before she was arrested. Judge Justice sentenced her to 20 years in prison for the murder of Alex. 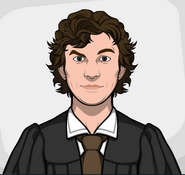 Alex, As he appears in his judge outfit in nearly every case. 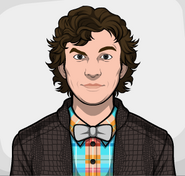 Alex, As he appears in The Cost of War, Motive to Madness, The Word of the Sinner!'s AI and Kill Switch. 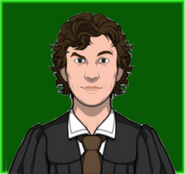 Alex Holiday, As he appears when mentioned in A Light Lunch of Guts. 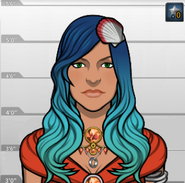 Thalia Kingson, Alex's killer!
Add a photo to this gallery
Retrieved from "https://criminal-case-official-fanfiction.fandom.com/wiki/Alex_Holiday?oldid=84986"
Community content is available under CC-BY-SA unless otherwise noted.