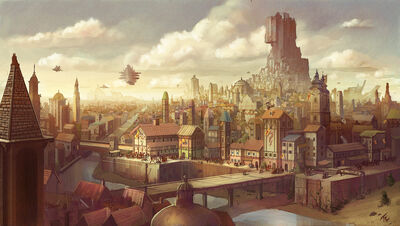 Aecrudia (pronounced ai-croo-dee-uh) is a city appearing as the main setting for Memories of the Past, the first season of Criminal Case.

Located in the United States, Aecrudia is a booming Victorian city of innovation and new beginnings in the late 19th century, despite the presence of lawbreaking individuals participating in illicit activities. A total of fifty cases are situated across the city, which is composed of eight districts.

The Aecrudian Police Department is the featured law enforcement agency that serves the city of Aecrudia.

The city of Aecrudia features eight different districts, each with unique scenery and composition.

Daytide Coast is the first district investigated in Aecrudia. It focuses on containing the outbreak of lawbreaking individuals who have a tendency to participate in illicit activities. It also focuses on an evil scheme taking place which may put many innocent native and immigrated Aecrudians at risk of everything they have.

Cases #1-#6 are situated in this district.

Retrieved from "https://criminal-case-official-fanfiction.fandom.com/wiki/Aecrudia?oldid=54232"
Community content is available under CC-BY-SA unless otherwise noted.