Adrian Lynn was a suspect in the murder investigations of GrimBadgers’ coach, Hal Kirk in A Head Loss (Case #4 of Grimsdale), Nodoka Kusama in Burn in Hell! (Case #11 of Grimsdale), and his brother Gregory Lynn in Overcooked (Case #15 of Grimsdale). He later on got killed in Whip My Hair (Case #16 of Grimsdale)

Adrian was found dead in the woods, with his head scalped off, and gum stuck on his body.

Once confronted with the evidence, Ramona admitted to the crime. She broke down to tears saying she never meant to kill Adrian. She then showed her star tattoo revealing her as a pagan, and told Mia and Hamilton that she never got laid, and that after hearing what the slayer’s targets are, she starting bringing the machete with her everywhere so she would have something to protect herself with. Tonight, she went into the woods to pick berries, when suddenly she heard someone approaching. Out of fear, she hid behind the trees, and waited for the person to come. When suddenly she flipped her weapon, and killed that person. She went to see who she killed, and to her surprise it wasn’t the brown-eyed slayer, it was Adrian with his blue eyes. Judge Powell sentenced Ramona to 5 years in prison.

Adrian became a suspect after he found the victim’s headless body in the tennis court. When asked about it, he began crying, saying he couldn’t believe what he saw, and was traumatized, which led to Diego and the player to leave him alone.

He was later spoken to again, after he had a fight with another suspect, where he mentioned he hated the victim. When asked why he hated the victim, he revealed that Julian was his friend, and that he was mad of what the coach told him.

After the investigation ended. He asked to see the player and Clay, he told them that he and Ramona bought tickets for the GrimBadgers match, to cheer Julian up, but he lost them in the gymnasium. The player and Clay found the tickets, where he thanked them, and they all gave it to Julian, alongside Ramona.

The team decided to go by Hamida’s plan, disguising Adrian as a prison guard, to fool Nodoka into escaping and attach a tracking device on her hair, to fund out where the money is hidden.

After Mia and the player found Nodoka’s dead body, they went to Adrian to inform him about it, where he was pissed since he risked his life, “helping her escape”, and the team didn’t manage to find the money.

In this case, while Hamilton was eavesdropping on Hamida, he discovered that she and Adrian broke up.

Adrian became a suspect after Mia and Hamilton had to investigate the victim’s room for clue. When informed of Gregory’s death, he refused to believe it, but when Mia convinced him it was true, he broke down to tears, even though he and his brother despised one another.

The team later on had to break down a fight between Adrian and another suspect, Steve.

After the team arrested the culprit, Hamida and Hamilton went into Adrian’s home to retrieve something Mia lost there, where he saw them, and he and Hamida started arguing.

At the end of the case, Hamida sent an Iris message to Mia and Hamilton, telling them Adrian have been murdered. 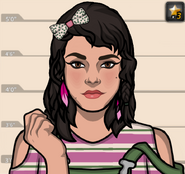 Gregory Lynn, Adrian’s late brother
Add a photo to this gallery
Retrieved from "https://criminal-case-official-fanfiction.fandom.com/wiki/Adrian_Lynn_(Grimsdale)?oldid=171535"
Community content is available under CC-BY-SA unless otherwise noted.