Acelya was found on the floor of the tech fair, with her head chopped off by a laser sword, which they found locked in the same room.

"Tiger admitted to the murder and revealed that he only did it so Acelya would stop hurting Jax with her consent questions about his missing brother. He explained that the questions were pushing his friend over the edge and that Jax was thinking about killing himself after having weird dreams about him and his brother, safe, together. Tiger broke into teasers and revealed that Jax loved his brother a lot and that he took the blame for him going missing all these years ago and that Acelya reminding him was hurting him, he wasn't as happy, wasn't as inspired as he used to be. He then said that he murdered her to get the old Jax back, the one who would joke, have fun and be creative. Not one that mourned for his long lost brother, not knowing if he was alive or dead." 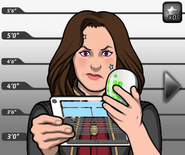 Acelya, as she appeared in Gone Without a Trace 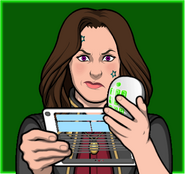 Acelya, as she appeared in Trapped in With the Killer! 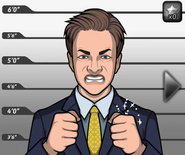 Tiger Dare, Acelya's killer.
Add a photo to this gallery

Retrieved from "https://criminal-case-official-fanfiction.fandom.com/wiki/Acelya_Yildirim?oldid=182589"
Community content is available under CC-BY-SA unless otherwise noted.