A Xerdan Death is a case featured in Criminal Case. It takes place in the Xerdan forest of Grimsdale.

Previously, Mia and Rozetta went into the forest, where they met up with Johanna, who gave them Xerdan disguises, and led them into a secret entrance to Xerda.

As the trio arrived to the city, Johanna started calling for Gorgeous, a Xerdan noblewoman who agreed to help Mia and Rozetta to sneak in the city, but she didn’t reply, leading Rozetta and Mia to search for her. While searching, they managed to find Gorgeous, but her body was slashed.

Rozetta started panicking, not only has she lost her friend, but also seeing that the body was near the secret root of Xerda and Grimsdale, chances someone is expecting them. Johanna calmed Rozetta down, and led the two girl into Gorgeous’ settlement, as a place to hide, until they find a safer place. Rozetta and Mia added Johanna to the suspect list due to her friendship with the victim, and they also found two other suspects: Xerdan warrior- Zara, and Josephina- A Xerdan girl, who Josephina told the duo that she is the daughter of Princess Xenia, Rozetta’s sister, who was created from clay. While recapping the case, a group of Xerdan guards came to arrest Rozetta, Johanna and Mia, to bring them to the queen.

The trio were brought upon the queen, who revealed to them that she knows “Pupinia” is her daughter Rozetta, and that Mia is an American demigod, as one of her faithful agents informed her. Rozetta decided to discuss the situation with her mother, and upon hearing of a traitor among the Xerdans, Penthesilia agreed to let them stay at Xerda, until The New Olympian member is caught. The queen was added to the suspect list, alongside her daughter, Princess Xenia. While investigating, Rozetta and Mia found out that Johanna didn’t trust Gorgeous to keep their plan a secret, due to her drinking habit, which leads her into spilling secrets, accidentally, and that Zara also didn’t trust Gorgeous on keeping her sexuality a secret, for the same reasons. The duo then decide to have a rest, when suddenly saw Josephina Iris-messaging Marisol Robertson.

The duo confronted Josephina, who revealed to them that she is a daughter of Demeter, and that she was snuck into Xerda, and knowing that Gorgeous and Johanna are friends of Rozetta, she decided to spy on them, where she eventually heard of their plan to sneak Rozetta and Mia in, where she informed the queen about it. The duo immediately figured out that Xenia is the Xerdan Olympian, and told “Josephina” that they’d tell the queen about this, where she laughed telling them that Penthesilia won’t believe a word of criticism they say about her prized daughter. The duo decided to search for clues of Xenia’s whereabouts, where they found her, confronted her, and brought her and “Josephina” to the queen, who didn’t believe a word they said, as they had no proof of “Josephina” being an American citizen, and that everyone knew that she is an ace at botany, and if they were to “make up” the fact she is a demigod, they’re most likely to say she’s a daughter of Demeter. The duo then found enough evidence to arrest Zara for the crime.

Upon admitting to the murder, Zara revealed that she is not a Xerdan, and that she is in fact an infamous tomb robber, called Kayla Markham. She revealed that a few years ago, while walking in the woods, she caught Rozetta leaving Xerda, where she sneaked in, and discovered the city. When she saw the artifacts, she saw it as a gold mine, and started robbing the Xerdan ladies, and smuggling the artifacts, where she’s sell them to antique shop owners, and end up getting lots of money. One day, she decided to rob the victim, but was caught, where she had to explain herself. Gorgeous knew that if the queen was to know of the fact that Kayla is an American citizen and that she is guilty of theft, she’d get in big trouble, and agreed to stay silent. Kayla knew Gorgeous for getting drunk at parties, and was afraid that although she promised to stay silent of Kayla’s activities, she might accidentally spill out Kayla’s secret, whilst being drunk, and so she decided to sneak up to her and kill her. Kayla was brought to Penthesilia who was going to get Kayla killed, but Rozetta told her that this murder is being investigated under Grimsdale’s authorities, so they get to choose what happens to Kayla, and so Rozetta told Johanna to send Kayla to the surface, and bring her to court, and assured her that Judge Powell, like Joe Warren knows about the existance of Xerda.

After Kayla’s arrest, Rozetta and Mia decided to find a way to prove that “Josephina” is not Xenia’s “daughter” and that both are members of The New Olympians. When suddenly a girl that looks a lot like Gorgeous, came to them, and asked them for help.

Rozetta and Mia went to speak to Gorgeous’ lookalike, who Rozetta knew as Gorgeous’ sister, Stunning. Stunning told them that she heard about Kayla, and that she’s like to have her pottery back. Rozetta and Mia then decided to search the secret entrance of Xerda, where they found a ripped document. They pieced the document back together, where they found out that Kayla’s latest sale was to an antique shop owner called Signora Madonna De Felice, and since Gorgeous’ settlement was the last one Kayla robbed from, they assumed that her pottery was probably sold to her. Rozetta and Mia went to confront Madonna, who claimed she had no idea Kayla Markham was a tomb robber and thought she was archaeologist. The duo didn’t believe her story, but they had no proof it was false so they let her get away with a fine, and demanded she gives all her artifacts back to them, and decided to give Kayla’s list to the authorities in order to get all stolen artifacts back to the Xerdans.

After helping Stunning and finding out “Josephina”’s true identity, Rozetta and Mia went to the garden, where they saw Penthesilia, Xenia and “Josephina” waiting for them. Rozetta then showed Penthesilia Summer’s passport, and was shocked when learning that it is Josephina, and even more shocked to think that her favorite daughter, Xenia, is a traitor to Xerda. Unfortunately, Xenia already prepared to this, and started explaining to her mother, that the New Olympians promised to give Xerda power, that the Olympic Gods didn’t offer, and even told her about The Anoterous, who The Olympians are planning to go on war with. When hearing of the topic of war, Penthesilia felt satisfied, and pardoned her daughter, and even went as far as telling Summer that she decided to join forces with The New Olympians. Rozetta tried to convince her mother not to, but Summer took control of the plants of the garden, and captured both Rozetta and Mia. Luckily, Mia was a daughter of Demeter too, and she managed to get free from the trap, and freed Rozetta as well. Mia then captured both Xenia and Summer, when suddenly guards came to surround them. Penthesilia then decided to make a deal: They can take Summer, but they have to let Xenia go, and if they don’t agree the guards will kill them at once. Rozetta and Mia agreed to the deal, and took Summer with them to the surface.

At the surface, Rozetta and Mia went into an empty courtroom to talk to Judith Powell, where they found Judith, Johanna and Kayla. Judith performed a private trial to both Kayla and Summer, where Kayla was sentenced to 15 years in prison, while Summer got life.

After the trial, Rozetta is seen sitting on the steps at the outside of the courthouse, where Johanna and Mia went to comfort her, and assured her that one day her mother will accept her as her daughter again.

Xenia of Xerda
Add a photo to this gallery

Judith Powell (GD)
Add a photo to this gallery 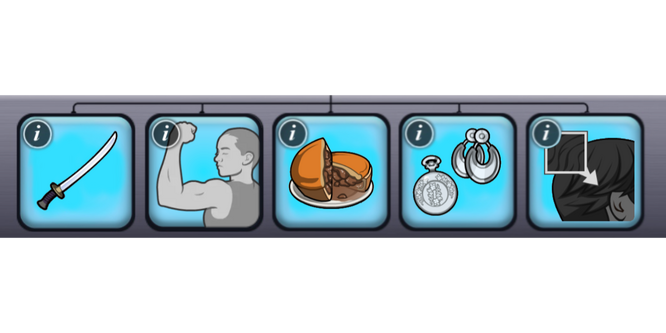 Retrieved from "https://criminal-case-official-fanfiction.fandom.com/wiki/A_Xerdan_Death?oldid=195126"
Community content is available under CC-BY-SA unless otherwise noted.