The player arrived at the Geheimnisburg Police Department, where Roger Hamilton, the Chief of Police, introduced the player to Detective Eric Bergstrom. They had just received a call about a body that was found in the woods. Eric and the player went to investigate, and found the victim, Gary McPherson, lying in the woods with his fly undone. Frogs were found in his pants.

They spoke to Brooke Willoughby, who had found the victim’s body. She had been walking her dog, and the dog had headed into the woods, toward the body. She claimed that she had seen the victim taking walks in the area, but that she didn’t know him that well. Eric and the player then spoke to Suzanne McPherson, the victim’s wife, and broke the news to her about her husband’s death. They learned that Gary McPherson was a research scientist at Biospherica Pharmaceuticals.

Marisol Flores, the forensic expert, told them that the frogs were lovely poison frogs, a type of poison dart frog found in Costa Rica, Nicaragua, and Panama. This type of frog is only dangerous in the wild, because their toxicity may come from their diet. Since these frogs were toxic, they must have recently been imported. Marisol found that Biospherica Pharmaceuticals’ research laboratory had been importing lovely poison frogs.

At the laboratory, Eric and the player found an empty vivarium and a note which stated that the frogs had all died, and research was suspended until new ones arrived. They spoke to Lucy Wong, the laboratory research assistant. Julie Hoffmann, the intern, was scheduled to come in later.

Kelly Murphy, the profiler, determined that the note was a forgery written by the killer. Because the lines were separated and evenly spaced, she could tell that the killer was organized.

Lee Chang, the coroner, found that the victim was killed by pumiliotoxins, toxins found in the skin of poison dart frogs. He also found sleeping pills in the victim’s system. He concluded that the killer must have used the sleeping pills to sedate the victim before placing the frogs in his pants.

Eric and the player found the victim’s car in the laboratory parking lot, and saw that a tire had been slashed. Traces of nail polish had been left on the tire by the cut. They found a photo of the victim and Brooke Willoughby, and showed the photo to Stan Dabrowski, a security guard at the laboratory. He had seen her come to the laboratory late in the afternoon on the day of the murder. They talked to Brooke again, and she admitted that she and Gary had been in a relationship, but she had ended it when she found out that he was married. She had gone to the lab to return one of his shirts, because she did not want to keep anything that reminded her of him. They also spoke with Julie Hoffmann.

Eric and the player went back to the laboratory, where they found the victim’s laptop in his desk. Joel Edelstein, the tech expert, found an e-mail from Lucy Wong in which she threatened to report the victim for unprofessional behavior. In his response, Gary had told her that she knew what would happen if she reported him.

Lucy told them that Gary had been creating a hostile work environment, and that she wanted to report him for sexual harassment. She had seen him looking at pornography, and she knew that he brought women to the laboratory after hours. Gary had told her that if she reported him, he would have her cousin from China, who had overstayed her tourist visa, deported.

Lara Petrenko, Geheimnisburg Police Department’s administrative assistant, told them that Suzanne McPherson wanted to know how the investigation into her husband’s murder was coming along. When they spoke to Suzanne, she told them that Gary had cheated on her constantly. She gave them the spare keys to Gary’s car, which was still parked in the laboratory parking lot. Stan Dabrowski confirmed that keys to the laboratory were on the victim’s spare keychain, and recalled seeing a woman matching Suzanne McPherson’s description at the laboratory on the day of the murder.  Suzanne said that she had gone there to see if he was really working late, and that he was not there.

Eric and the player found monogrammed panties with the letter J in the victim’s car. Julie Hoffmann admitted that they were hers, and that she and Gary had been having an affair.

They returned to the crime scene, where they found gloves and a glass jar. Marisol was able to extract enough DNA to determine that the killer had blue eyes and blond hair.

Eric and the player arrested Julie Hoffmann for the murder of Gary McPherson. Julie said that Gary had told her that he loved her, but he kept making excuses to put off leaving his wife. When Brooke had come to the lab to return Gary’s shirt, Julie overheard him tell Brooke that he loved her and ask for another chance. Julie was hurt, so she slashed Gary’s tire, and she took the frogs from the lab. She offered Gary a ride home, and gave him a water bottle laced with sleeping pills. She drove him to the woods, and after he lost consciousness, she put the frogs in his pants. Judge Dufresne sentenced Julie to 25 years in prison for first degree murder and animal abuse.

Eric and the player then found Brooke’s lost dog, found and returned Gary’s wedding ring to Suzanne, and reassured Lucy that they were not going to go out of their way to track down her cousin. 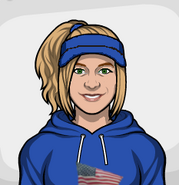 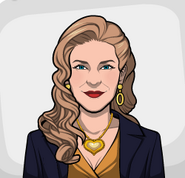 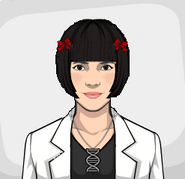 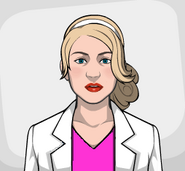 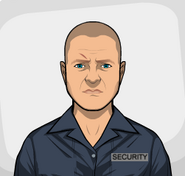 Stan Dabrowski
Add a photo to this gallery
Brooke Willoughby

This suspect is organized.

This suspect is organized.

Retrieved from "https://criminal-case-official-fanfiction.fandom.com/wiki/A_Lovely_Way_to_Die?oldid=52386"
Community content is available under CC-BY-SA unless otherwise noted.