"Back to school with a brutal murder on campus! A body of a top student was found armless and legless with a ballpoint pen on his chest! Can you find his killer before the school bell rings?"

A High School Murder is the second case exclusive to Criminal Case: The Conspiracy.

Because Jones was taking Gloria for a tour around Grimsborough, the player accompanied Hasuro to NBK High School upon receiving reports of a murder from biology student Philip Pierre. They then collected the armless and legless body of chemistry student Brandon Wilson, who was hung on a tree with a ballpoint pen on his chest.

Later, the team heard Judy's scream and quickly went to Chemistry class, where they discovered Judy with the victim's arms. Later, while walking in the school campus, suddenly a tennis racket fell into Hasuro's leg. After gaining enough evidence, Hasuro and the player arrested Judy for the murder.

Upon admitting to the murder, Judy angrily told the team that Brandon had killed her parents two years ago by hitting them when driving to school by his car although he was underage. After receiving the bad news, Judy was heavily shocked. However, after Judy told Brandon's secondary school's principal about her parents' deaths, he just told Judy that it was an accident. One day, she discovered that Brandon's parents and him had paid the secondary school staffs and people who witnessed the murder not to tell others about the murder and pretended that it was a car accident. Knowing that she couldn't do anything then, Judy left her secondary school and tried to study by herself in order to be NBK High School's student so that she could confront Brandon. After successfully being a Literature student with the highest score, Judy planned to kill Brandon. She had told him to meet her in the school campus the night before Brandon was killed. After Brandon got there, Judy came and used a ballpoint pen to stab Brandon on the chest. She then hung up Brandon and cut his arms and his legs. In the end, she also lied about accidentally finding the victim's arms, confessing that she secretly put his arms there and then screamed in order to get the police's attention. Judge Powell then sentenced her to 15 years in prison.

Post-trial, Arif Hassan came to the station, telling Jones and the player that he was going to resign from the Grimsborough Police Department and go to Fario to follow his dream of becoming a tech expert. The team then helped him found his tablet, which was lost in the NBK campus. Arif then thanked the team, saying that he would always miss his moments with the Grimsborough PD.

Meanwhile, the team asked Yoyo what happened after seeing her in front of the NBK chemistry classroom, scared. Yoyo then explained that there was a strange noise coming from the classroom, however, after she headed to the classroom to see, there was no one there. The team then investigated the classroom and found Hamad's cat inside the classroom's locker. After finding out that the strange noise Yoyo said came from Hamad's cat, the team gave his cat back to him and asked him the reason why his cat was in the classroom. When being asked about that, Hamad said that it was Brandon's another prank as he was angry after Hamad refused to let him copy his homework. After that, the team went and explained to Yoyo all things, which made Yoyo feel better.

While walking in the school campus, the team met Philip, who wanted to talk to Hasuro and the player, telling that he needed their help so that he could confess his love to his crush. With the help of Amir, Gabriel and Jasper Everett, Amir's boyfriend, Philip and the team were able to write a love letter and sent it to Richard, Philip's crush. After finally confessing his feelings to Richard and becoming his new boyfriend, Philip thanked the team and gave them an NBK student uniform as well as NBK school badge as gifts.

Yoyo Ip
Add a photo to this gallery

Amir Devani
Add a photo to this gallery 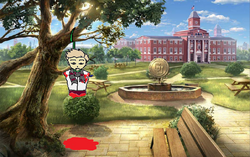 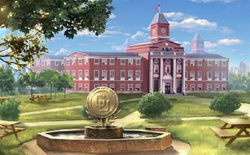 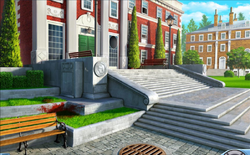 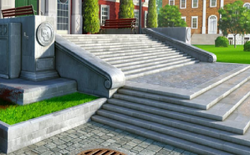 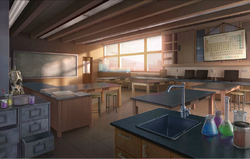 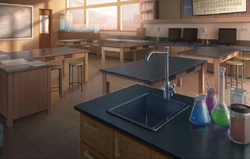 NBK Experiment Area
Add a photo to this gallery

Retrieved from "https://criminal-case-official-fanfiction.fandom.com/wiki/A_High_School_Murder?oldid=90692"
Community content is available under CC-BY-SA unless otherwise noted.